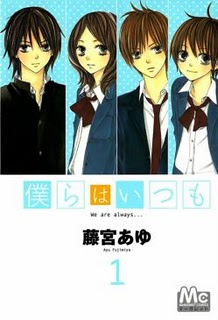 The series is composed of four heroines/heroes.

Nori: An energetic, upbeat girl who was heartbroken sometime ago due to her childhood friend. Now she is headed to meet Haruna, the lonely kid who she always played with back then but she was surprised to see he turned out to be a hunk.

Kyou: The school's prince. From a distinguish family: he is handsome, smart, athletic and rich. He has never struggle for anything in his life, be it money or women. Haruna's sudden return throws him off momentum.

Saeka: Nori, Kyou and her are childhood friends. She is mature, composed and understands the two quite well. Although beautiful she has never gone out with anyone due to being in love with her teacher from middle school. Will her feeling be answered or will she find an unexpected love around the corner!?

Haruna: The boy who comes back after leaving for many years. His reason for returning is unknown. The guy who’s clouded with mystery shows interest in Nori. Does he really like her or is there something else behind it...

Summary: Nori Sakurada is riding her bike one day, when she meets up with a boy she used to know when she was little. He has grown, but doesn't look very happy...