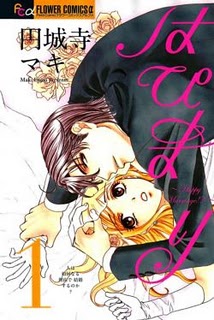 Men - they're the root of Takanashi Chiwa's problems, which is why she never had the time nor the opportunity to have a boyfriend in her entire life. A full-time office lady and a part-time hostess, she works night and day to pay off her dad's debt from his failed business. One night at her part-time job, a high-class customer has her fired. Then the next day, she's called in to see the president - whom she had never even seen before in the office - only to find out she's to marry him! But what kind of guy is Mamiya Hokuto anyway? Will he become one of Chiwa's problems, or will he save her from them? And will this marriage even last?!
_Chapter Summaries:
Chapter 34 / Chapter 33 / Chapter 32 / Chapter 31
Chapter 30 / Chapter 29 / Chapter 28 / Chapter 27 / Chapter 26 / Chapter 25 / Chapter 20 / Chapter 19 / Chapter 18 / Chapter 17 / Chapter 16 / Chapter 15 / Chapter 14
_Note: Scanlation for Hapi Mari has been dropped. Please visit Aerandria's website for future updates.